Inspired by the poppies installation at the Tower of London, I took myself off to London’s IWM, aka the Imperial War Museum, in Kennington this week. I was aiming for the  First World War Galleries, part of the museum’s redevelopment commemorating the centenary of WW1. But first I lingered in the new atrium, an astonishing, 14m high space filled with objects that, as the museum puts it, ‘bear witness to the force, fury and physicality of war’. 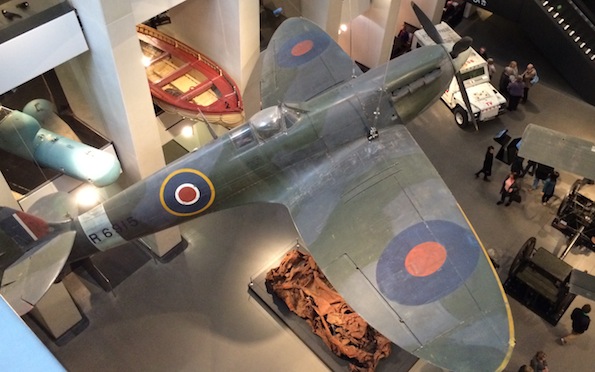 Each of the objects has its own story to tell, from the Battle of Britain spitfire and the Harrier jet twice deployed to Afghanistan, to the remains of a car destroyed by a bomb in Baghdad and a Land Rover once operated by Reuters on the Gaza Strip. A doodlebug is suspended next to the tip of a V-2 rocket. A T-34 tank looks ready to take Kennington. 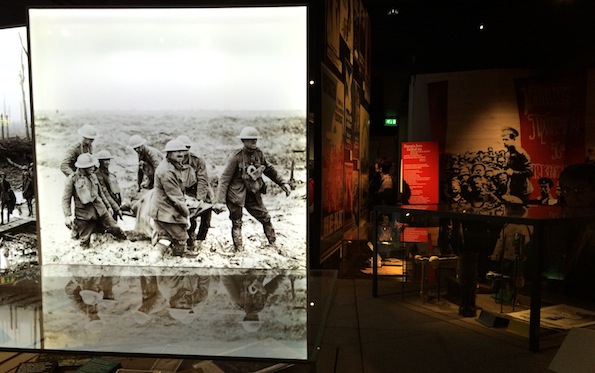 The museum has a numbers of exhibitions spread across its five floors, but I was there to find out about the Great War, so I made my way to the First World War Galleries. The Galleries cover all aspects of the war, from the years of uneasy peace before its outbreak to the full horror of war, both in the trenches and on the home front. But it’s not just about the big things, there is also a wealth of minutiae, such as why Britain raised its minimum height requirement for volunteers to 5’6”, only to lower it again to 5’2”, and why it became illegal to buy a round of drinks in a pub (you’ll have to visit the Galleries to find out). 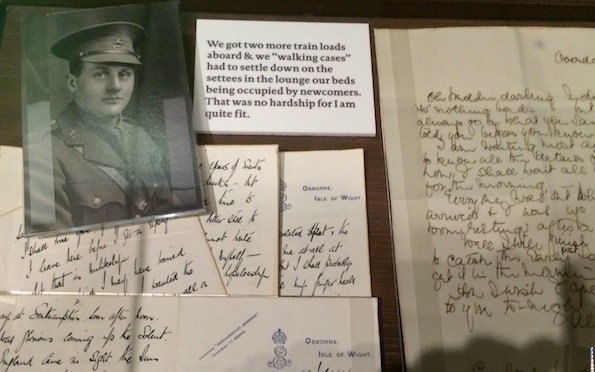 Binding it all together are fantastic state-of-the-art displays, specially made films, old newsreels, and interactive exhibits. In the end, though, it’s the personal items that bring the sheer horror of it home: the much-read love letter, the dog-eared photograph, the lucky charm that turned out not to be so lucky after all… 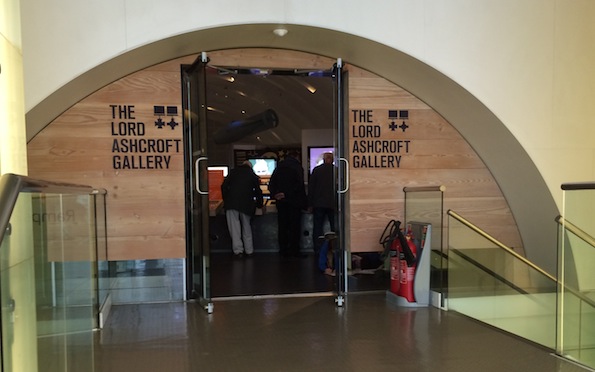 Sticking with my WW1 theme, I took the lift up to The Lord Ashcroft Gallery on the fifth floor. Here, the Extraordinary Heroes exhibition celebrates the bravery of 250 men and (very few) women awarded the Victoria Cross or George Cross since their introduction in 1856 and 1940 respectively. In many ways I enjoyed this more than the WW1 Galleries, particularly when I came across one Gerald O’Sullivan VC who had done something very brave at Krinthia, Turkey, in 1915, armed only with jam-tin bombs. And then there was the dashing William Robinson VC who, in 1916, brought down a German airship single-handedly while thousands of Londoners watched from below. WIth hundreds of tales of valour ‘in the face of the enemy’, right up to the present day, Extraordinary Heroes was both poignant and unexpectedly uplifting.

The poppies at the Tower of London represent 888,246 British lives lost in the Great War. I now know who some of them were.